NetFlowCoin: Forging the Future of Layer Ones

Web 3 is an ocean of information. Deeply submerged at its floor lay Layer 1 protocols: diverse blockchains capturing and processing data in unique ways, co-existing in the vast ecosystem. Since the inception of consensus-driven peer-to-peer technology, we have seen the gradual evolution of Layer 1s, adapting to the ever-expanding needs of the netizens.

Bitcoin started the wave. As the first block-based chained data structure with asymmetric encryption, Bitcoin opened a portal to a new paradigm in the web, making possible anonymous and trustless peer-to-peer transactions on a fully decentralized and transparent network. Now people could bank themselves securely and maintain full control over their digital assets and identities on a network accessible to anyone, anywhere, anytime.

But Bitcoin’s shortcomings revealed themselves in the way of scalability and development. While users sought to build and expand the network’s capabilities, the first blockchain technology was limited. This gave birth to a new generation of Layer 1s with open source development and expanded support as their drivers.

The Ethereums, Trons, and EOSs of the space ushered in the widespread development of Smart Contracts, Virtual Machines, and DApps. This catalyzed a massive expansion in Web 3: equipped with more robust on-chain applications, advanced decentralized finance protocols (Defi), and a growing community of crypto-native builders.

While the emergence of Blockchain 2.0 massively improved upon the original technology of Bitcoin and opened doors to new possibilities in Web 3, the technology was still in its infancy. Many next-gen Layer 1’s still fell short in scalability, stability, and performance. Furthermore, as non-crypto native users began to enter the space, there grew increasing demand for “real word” off-chain applications to be bridged onto the blockchain. But this was rarely achievable without immense friction.

Today, we are seeing the full potential of Web 3 come to fruition. Layer 1s have evolved from emerging underground technology to scalable, secure, and highly efficient enterprise-ready solutions. Proof of Stake and Sharding consensus models have made it possible for Layer 1s to achieve transaction speeds nearing a fraction of a second with negligible network fees. And the likes of Value Mutual Trust Networks have made bridging “real world” applications (beyond currency and finance) a reality.

NetFlowCoin is the culmination of this evolution: a Layer 1 solution that offers the best features of the current technology — open-sourced, high throughput, uncapped scalability, and impenetrable security— while forging the future of blockchain as the underlying decentralized network layer on which nearly any feature is buildable.

The Future of Layer 1s

As a Distributed IP Network built using the SDVN protocol, and combined with the blockchain incentive layer, NetFlowCoin can bridge the best of both on and off-chain worlds by hosting an expansive breadth of DApps and APPs. NetFlowCoin is poised and ready to integrate nearly any application from Web 2 onto the blockchain.

Furthermore, NetFlowCoin is a customizable network that gives users a wide spectrum of ownership and control of their network build. Rather than specializing in one network feature such as static data storage (see Filecoin), the NetFlowCoin network makes possible this as well as dynamic data storage, distributed IM, and can perfectly adapt to an expansive range of IP network application scenarios.

On top of this, NetFlowCoin was built for adoption. As SDVN has been utilized by off-chain enterprises for the last decade, the technology has accrued millions of native users who can integrate into NetFlowCoin with minimal friction. Furthermore, while other Value Mutual Trust Networks have high participation thresholds with steep requirements in hardware, capital, and technology strength, NetFlowCoin is optimized to have none. True to the original spirit of blockchain, everyone from enterprises to individuals can participate seamlessly. 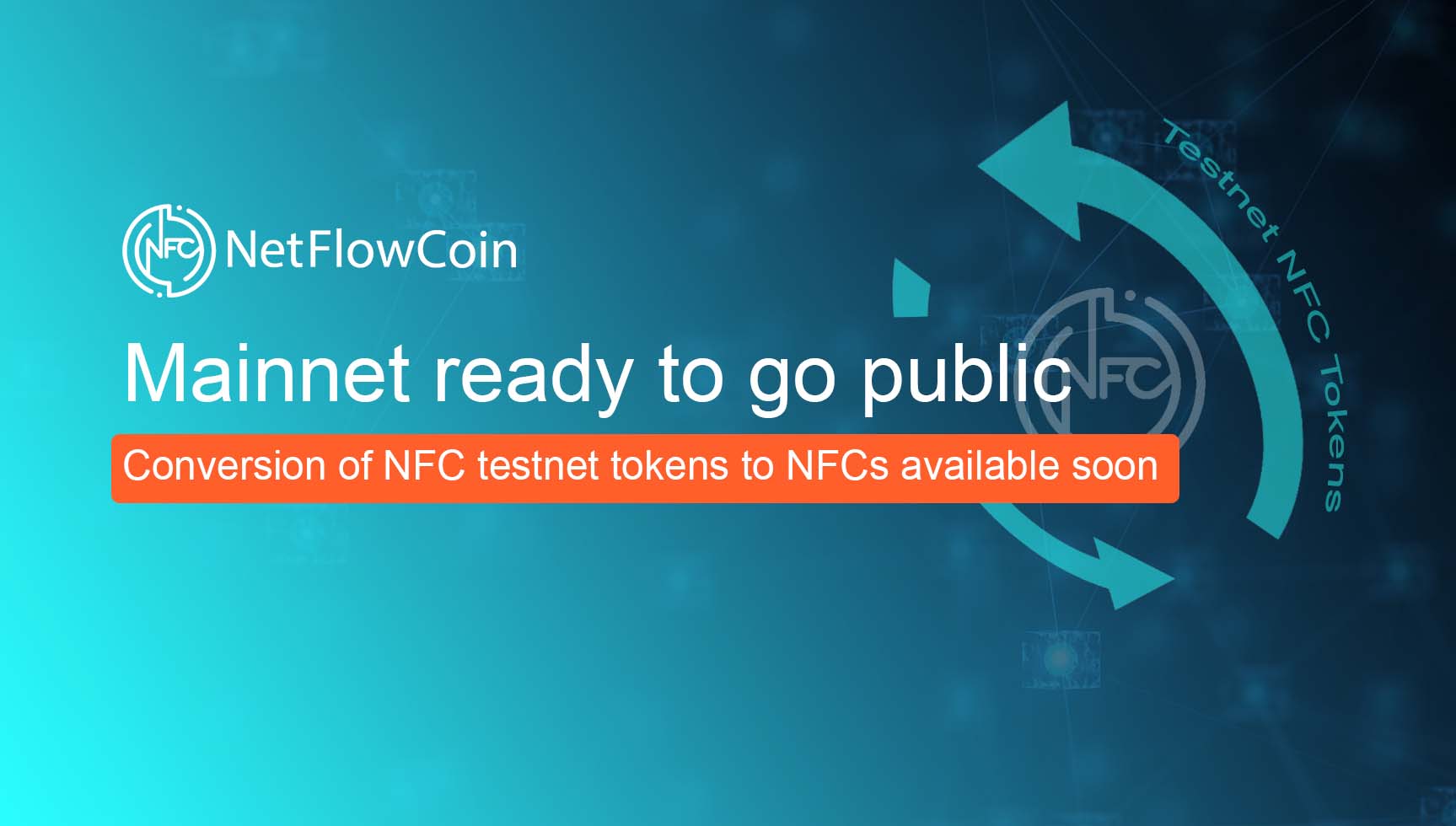 Hello to all NetFlowCoin testnet miners!

Your contribution to the NetFlowCoin network and community has always been something we admire and take great responsibility for.

Without your participation, the NetFlowCoin mainnet could not have been a successful launch.

With the arrival of the NetFlowCoin mainnet token’s IEO, we are pleased to inform you that the function of converting testnet NFC tokens to mainnet tokens will be available soon.

After the conversion, you can withdraw the mainnet native coin ‘NFC’ that meets the conditions of your NFC mainnet address.

Please pay attention to our Twitter for more information about the the conversion launch.

Thank you very much for your continued support of the NetFlowCoin project.

We are excited to continue working with you to build a strong, decentralized, and efficient foundation for human society.